July 11, 2020
Learning to program has been something I always wanted to do but I never had a chance to really get into it.  Life, family, work.  But I remembered discovered that if there is a passion I want to follow, there are means for me to make it happen.  Along with my brother, we decided on a path and will follow it to the end.  Well, there is no end.  But it's a path to move us forward.  Is that not what we all want?

Learning  the code was not too difficult. I began using an app on the iPhone for that.  There are a number fo online options to use as well and I will include it in a separate post for us beginners.  And if you have an iPad or a Mac, Apple has generously offered an apple called Playgrounds that made coding so basic and fun that it is essentially a game. 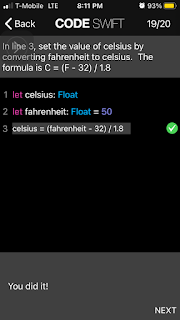 I started using an app called Code! Learn Swift (link).  First, I want to let you know that the app is free to download and use.  The first two lessons are also free.  After that, you have to unlock the rest of the lessons by way of an one-time $9.99 in-app payment.  So far, well worth it.

Although for a complete newbie to coding I wish the program had a glossary of coding terms and definition for each. It can be grouped alphabetically or even grouped by lessons.

So for me I would follow the prompt and was not difficult. If I made a mistake i.e. mistyped or typed in the wrong symbol in a line, an exclamation mark would appear. Code Swift has a setting which you as the user can enable in the settings to let you know if you made any mistakes.

I have to admit, there were times when I used the trial and error theory but I would be reminded of any errors because the exclamation mark would appear.  IfI needed help (one more than one occasion), help in the app is easily accessible. First, I would simply wait and not do anything a red box would appear at the bottom asking if you are stuck and to press the box. Second, I would simply press run at the bottom right corner and a box would pop up with instructions.

Lesson one is called Swift Basics.  It gives the users a chance to get more comfortable with coding and does not overwhelmed the users so that they feel despaired and end up quitting before they really begin.  Apple's GarageBand is like that as well.  In fact, I suggest you use Code! Learn Swift or another app you like along with GarageBand if you can.  If not Swift or if you rather learn programming using another language, it's about following through.

In lesson one, you learn about variable, how to print, strings and at the end of the lesson, you have a couple of challenges that put you through what you just learn.

So get started.  We have.  Let's following through together.  I'll be back with another update shortly. 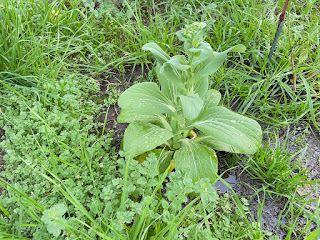 This is a test post. These photos are attached. This one should work. Embed a photo in the first post did not work for me a few years ago when I tried it. I don't know if anything has changed by Google.
Read more 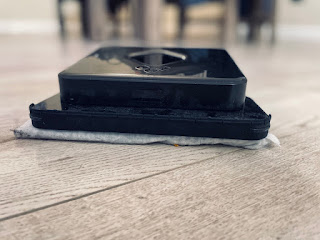 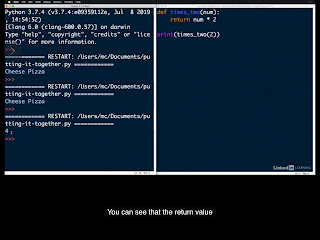